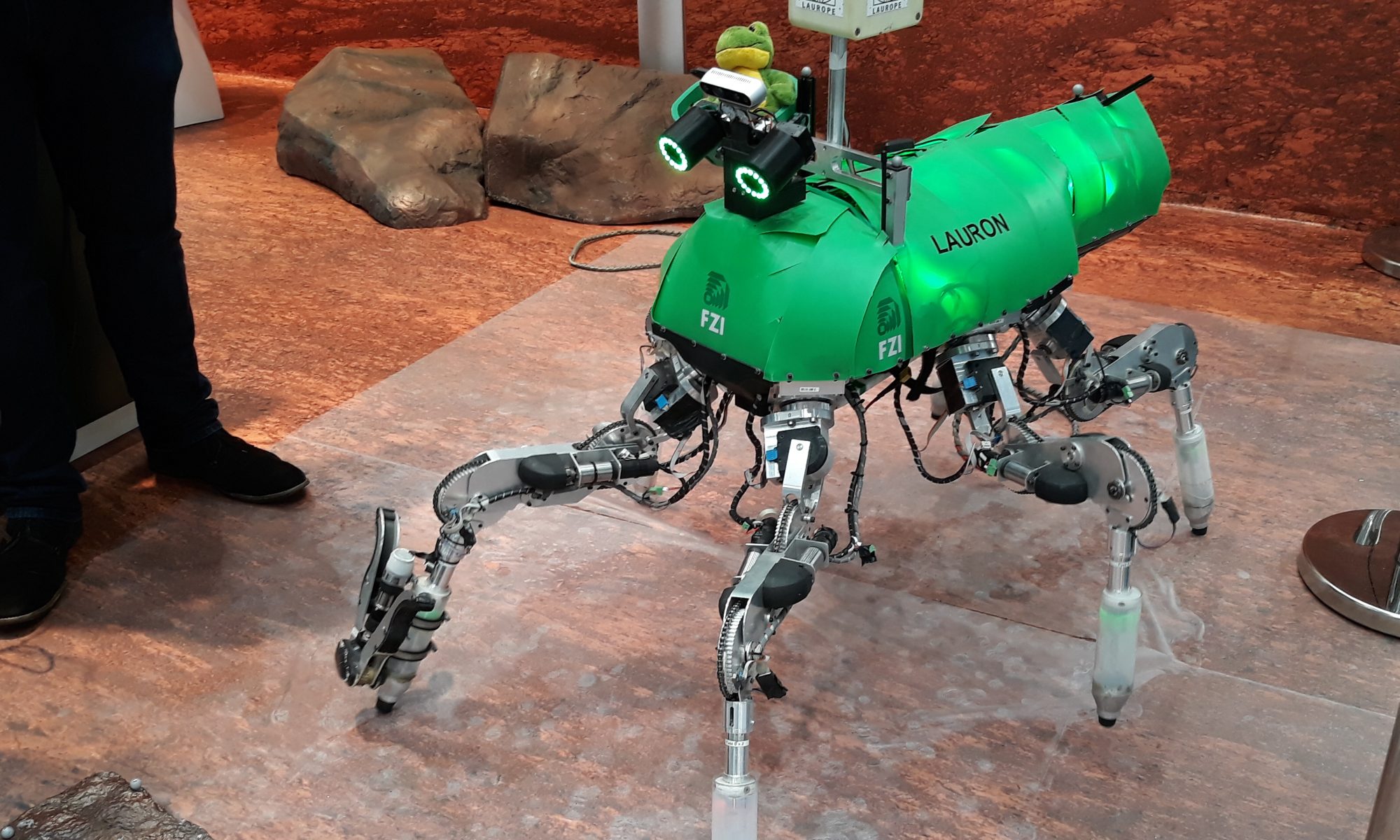 U&I-Robotic Dance is the first FlashMob for robots where different types of robots interact in a dance. U&I-RD is open for androids, insectoids, canoids, diverse household robots, industrial robots and last but not least drones.
It’s a fun BYOR (Bring Your Own Robot) party project. 🙂

Due to the corona pandemic we developed a special Corona Stay Home Edition which was premiered on May 23rd 2020:

U&I-RD is conceived as an open collaborative art project, where the robots, the robot handlers and programmers are invited to develop and test new ideas. As a non competitive BYOR project we create an atmosphere where art and technology blend in a unique way.
The initiator – the German choreographer and concept artist TeeKay – has a vast experience in bringing people together to perform. In 2007 his project “Dance the Cranko” turned the whole city of Stuttgart into an entertaining summer dance class.

The project was first presented in September 2019 at the German AI conference in Kassel. Heise Online, one of Germanys most prestigious IT-platforms published made it their headline in the article published about the conference.

At industrial fairs we are prepared to collaborate with the already pre-installed industrial robots. In many companies the R&D departments have already developed “Show Choreographies” to attract visitors to their stands.

U&I Robotic Dance offers a mix of movement patterns (choreographies) for various robots. It is the first time that completely different types of robots will dance together. The robots will also interact with human dancers.
The following 5 subsections and the Grand Finale are in testing at the moment:

For thousands of years people all over the world have used dance as an art form capable of bringing humans together without using words, only relying on body language and the expression of feelings through movement. Usually this would happen at large festivals and holidays, in locations such as barns or ballrooms, very often involving a lot of preparation and rehearsals in the weeks and monts before the occasion.
FlashMobs habe changed this pattern – the gathering of many interested dancers in a location where the dance of masses provides an astonishing moment of suprprise.
U&I-RD takes this concept to a new level.

Here you will find more detailed information on the different choreographic sections. Please note that every robot will be part of the section most suitable to its kind and the Grand Finale.

This section focuses on the organized spatial patterns of miniature drones.
They will circle and spin as cloud like swarms and line up to geometric patterns. This will include 1-dimensional “line ups”, 2-dimensional “planes” and 3-dimensional crystal formations.
As a climax they will circle around Peter Pan, up to 8 drones on every level.

Please be aware: due to the special demands and regulations for drones we may have to limit the amount of participating drones. All drone movements have to be pre-programmed for the indoor performances.
In the outdoor events drone handlers can steer their drones live.

Spiders and insects – arachnoid and insectoid robots – will flood the dance floor or specially prepared small critter stages on tables. They will move in wanve like patterns.
Tiny drones hovering above them may also be included.

In this section, humanoids dance together with real people, partly freely improvised, partly in a group choreography.
Stories about life like machines and avatars have been a part of human story telling: Pygmalion wishes his beloved statue to come alive and Aphrodite, the goddess of love, grants his wish. Galatea is considered to be his daughter. “Coppélia” is the ballet version of E.T.A. Hoffmanns novel “The Sandman”, in which Nathanel wearing a kind of AR-glasses persuade him, the the android robot constructed by Dr. Coppélius is alive.
IN the 20th century moving like a machine, dancing like a robot robot has inspired many dancers and choreographers.
So we will bring them together and find to find who flirts with whom 🙂

Very often robots have been used to produce music, usually copying the way humans do so. One of the most famous experiments is the James Bind theme performed by a swarm of quadrotor drones.

The drone xylophone of the MIT is definitely one of the most fascinating projects. But as with most projects all the drones are identical. This facilitates programming and execution.
As with all other segments we take a new approach, bringing together different robots. In this experimental section we try make use of the fact that by changing the speed of robots you may tune them into different frequencies. This way simple melodies will arise from the normal buzz.

Industrial robots will be in a close and intense interaction with the dancers.
The robots serve as partners for the dancers, who will be touched, lifted and whirled just like. Styles can vary between a neraly classical pas de deux to lifts and flips from Lindy Hop, Rock`n Roll and other acrobatic dance forms.

The climax is a part of absolutely synchronized choreography, in which all robots and dancers will follow the same spatial patterns together.
This way we create the sensation of peaceful collaboration in an artistic effort.

This webiste is continuously improved and changes. The last time this specific subpage has been updated was February 20th 2020.
In case you are able to spot any typos or a blocked link, please do not hesitate and let us know by sending an email to regie(at)kreissig(dot)net including a link of the specific subsite.
I appreciate your feedback and hope you will have a wonderful day :- )