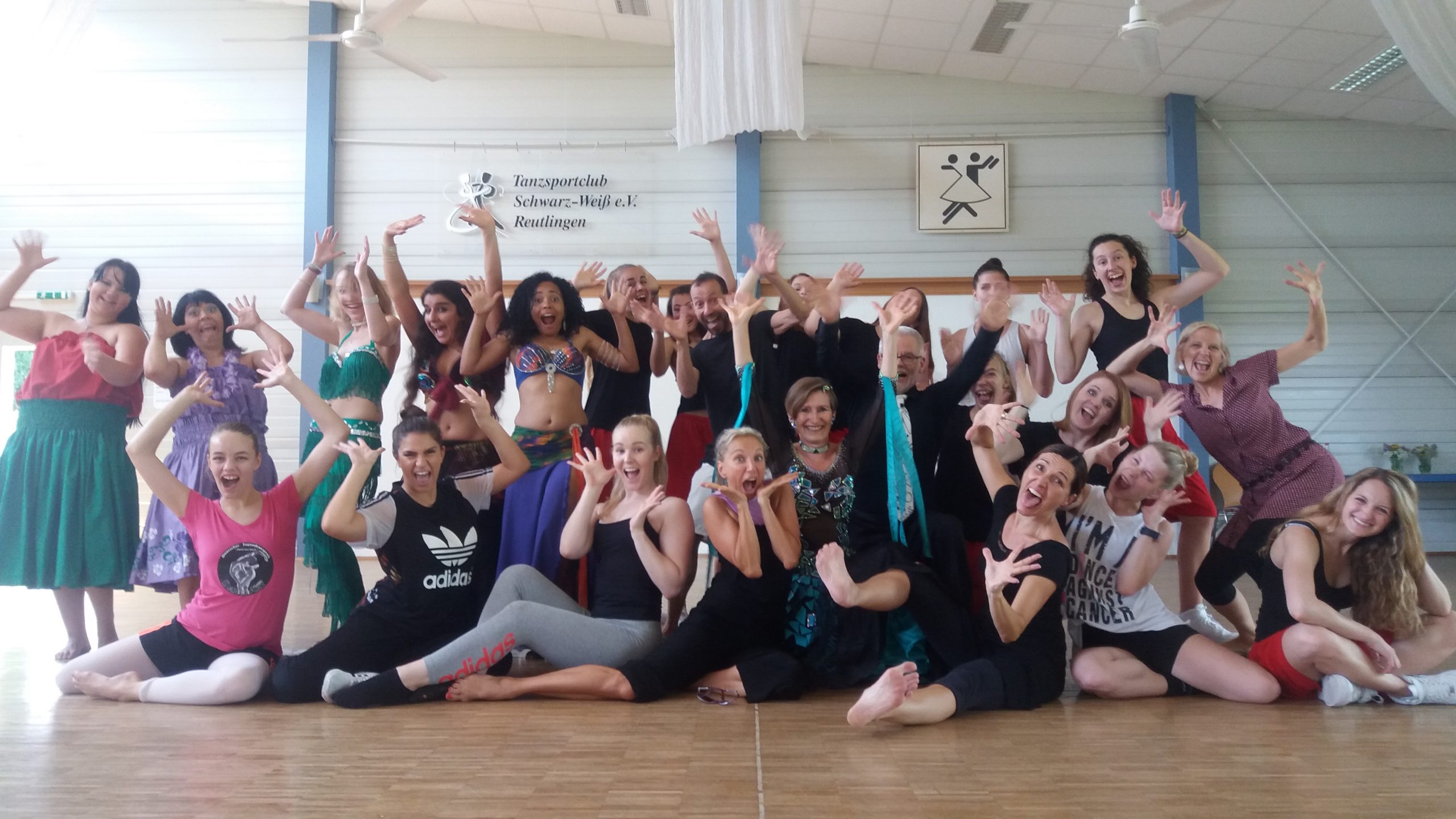 With “Don’t be shy”  Kreissig returns to his home town

For the 5th time, the Netzwerk Kultur organized the Reutlinger Kulturnacht on Saturday, September 23rd  2017. Impressive light art installations shrouded the city in bright colors. Visual artists, dancers, musicians of all styles, actors, writers and artists presented themselves in more than 30 in- and outdoor spaces of the city.

Reutlingen’s new agora, the conference center (“Stadthalle”) was transformed into a dance hall (“tanzHALLE”). More than 50 dancers of 12 nations whirled around the gigantic central figure of Terpsichore, the muse of dance.
Modern, traditional and experimental dance styles met and were united in the 20-minute opening show celebrating dance as a universal and cross-border means of expression.

Enjoy the video of the rehearsals:

“Don’t Be Shy” was the first joint appearance of the diverse dance scene in the region of Reutlingen. A medley of pop music classic music, musical and film music (including Cabaret, Pirates of the Caribbean, Imany and David Bowie) combined rigorous rituals, free improvisations and complex sequences of dynamic spatial patterns into a great spectacle. Impressions of the rehearsals were captured on video.

The staging, conception and choreography of “Don’t Be Shy” was developed by Thorsten Kreissig and Ramona Mathes. Mathes was a student of Kreissig in the early 90ies when he stages his first children’s ballets. She had her first starring role in “Insects” as a lumber rattle alongside the cockroach portrayed by Mark McClain, first soloist of the Stuttgart Ballet.

Participation of the public

Because the activating participation of the public is Kreissig, as in all his participatory art and performance projects very important. Already at the dress rehearsal on September 16, 2017, when all participants not only overcome occasional drizzle, the audience was invited to dance. One spectator was so enthusiastic – and so talented – that he not only danced the simple parts of the choreography of “Pirates of the Carbibbean,” but also the much more complex “Do not be shy.”

Over a period of several months, this unique cooperation performance was developed over a total of four weekends together with the many performers. In May 2017, the first free sample for all concerned took place. For many of the young actresses it was initially unfamiliar to be able to contribute themselves in the improvised passages. But after initial shyness, a wonderful hidden object of individual stories emerged.

Some of the dance schools not only sent dancers to the project, but also provided their rehearsal rooms in turn. Special thanks are due to Sibylle Rutsch from DanceArt Pfullingen, the dance sport club Schwarz-Weiß Reutlingen and Belly4Soul Reutlingen for the generous and uncomplicated provision of their rooms.

This way, everyone involved immediately got to know the many dance locations whose pupils and dancers were involved. But no rehearsal in the hall can prepare you for an open-air show. Therefore, from the second weekend in July also tried locally. Alone the difference in the distances let some participants gasp faster than expected.
The red shoes – a symbol of dance

The first rehearsal weekend focused on the dance-theatrical opening sequence. People trapped in gray trench coats fight for free. Afterwards, dancers from Stuttgart and Reutlingen created a first sketch of the solo performance of “Red Shoes”. The lyrics that David Bowie takes here are references to one of the most important classical dance films, the “Red Shoes” of 1948, which in turn is based on a fairy tale by the Danish junk maker Hans Christian Andersen, whose fairy tales have been filmed countless times and put on stage ,

From the final rehearsals in September, the stilt-performing Diseuse Ina Z. joined the dancers, who, as all the other outstanding, 3.50 m Terpsichore is the center of this Reutlinger dance vertebra.

Participating dance schools in the “tanzHALLE”

(We are in the process of making the content of this website available in more languages apart of German. This may result in internal links errors, as well as content or spelling errors. Should you come across anything inconvenient feel free to let us know by sending an email to kreissig@kreissig.net