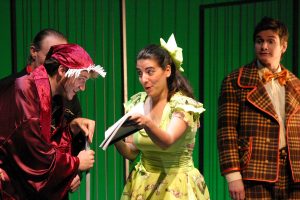 Already the original plot of this wonderful Rossini Farsa deals with the problem of lost identities. A constant and unstoppable chain of confusions is the base of the witty plot. Confusing people just as much as objects, be it by chance or by treachery, by disguise, similarity and dissimulation – it’s great fun to watch.

Theatre in the theatre 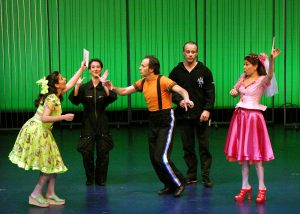 In 2015 Kreissig and his team extended this principle to the extreme by incorporating further possibilities for cunfusion through a “theatre in the theatre” framework. The exopected guest performance of a touring company was shattered by numerous minor and major catastrophes.
Their truck with the sumptuous equipment was stopped at customs, only a few costumes and props have arrived with the singers and the dresser

The talented buffo tenor suffers from a severe cold – not even the slightest whsiper comes from his aching throat. So the director has to jumps in for him – he actually takes the chance to give some final stage directions to the uncooperative star tenor from iceland who had ebben consistently refusing to adhere to his brilliant directions.
Without their proper costumes the singers start to piece, adapting to the unusual situation as good as possible. They make use of the metal elements of the stage at Bad Wildbad, who actually belong to another production.

Pinning paper on the metal cases and truning them into any desired prop through their way of intersating with it, the boxes are continously fulfil their newly assigned functions: they will be a bathtub, a race car, a rotating platform in a peepshow, a bar  and a telephone booth.

Working with an extremely international cast was a special treat for Kreissig: all singers enthusiascally enjoyed plunging into the many absurd ideas, added new ones and  were involved in this operatic adventure.
While the rehearsal time with the singers in Wildbad was just under 3 weeks a longer path preluded for the two acrobats who were an integral part of the show: for over than half a year the complex movement patterns for the ouverture were concocted. Each one had to be tried out slowly before they could finally be executed at the desired original speed, perfectly timed with the overture.

(This subpage has been updated on August 11th 2018. We are in the process of making the content of this website available in many languages apart of German. Should you come across wrong links or confusing texts feel free to let us know by sending an email to kreissig@kreissig.net)