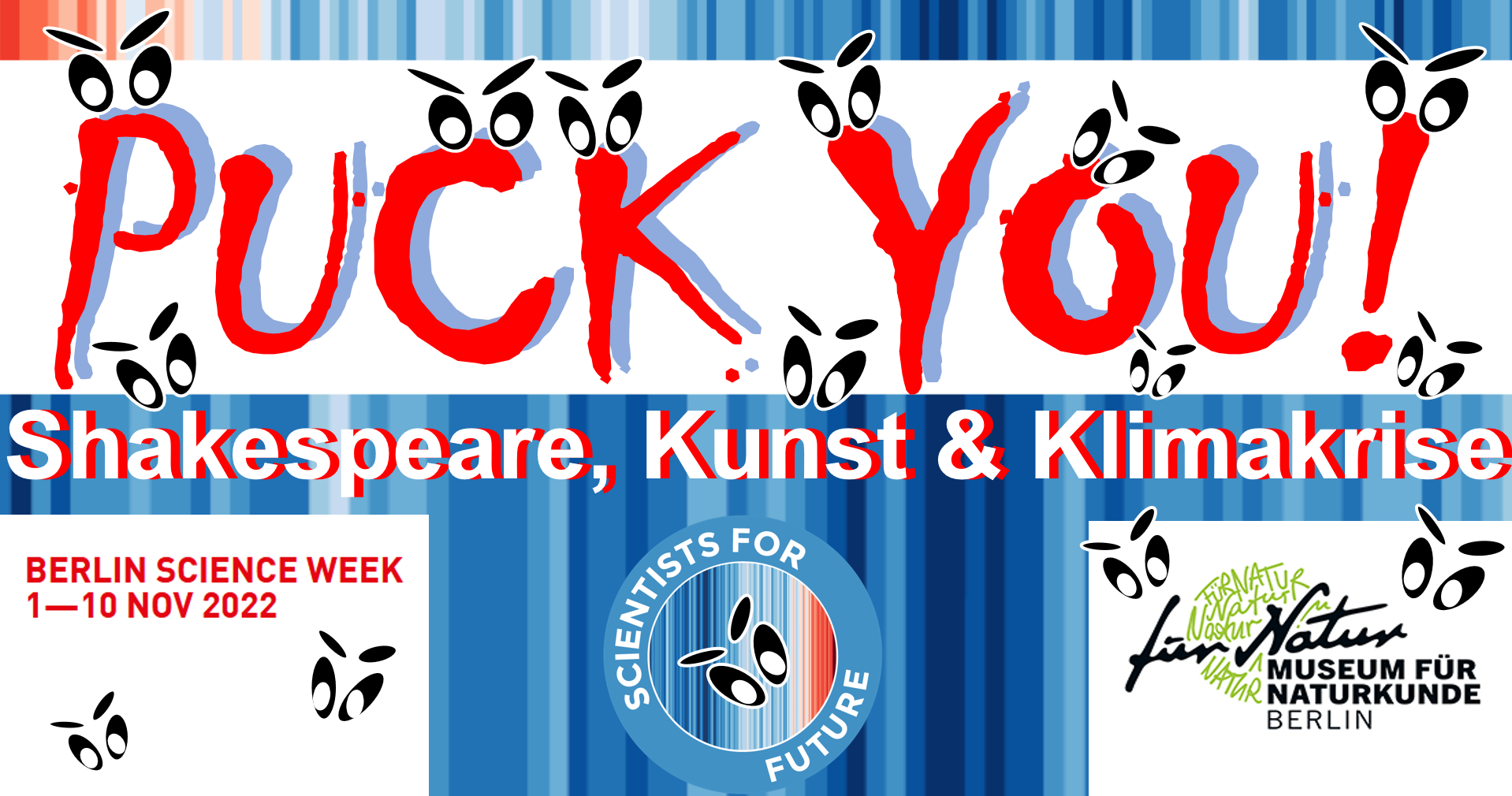 Tl,dr: What do “A Midsummer Night’s Dream” and climate change have in common? A great deal, as more than 50 active participants at the Berlin Science Week workshop were pleasantly surprised to discover. Inspired by Shakespeare’s characters they enacted the „ruling class“, the „rebellious youth“ and the middle class „craftsmen“ as they entered in the most urgent social dialogue of our time. In just 90 minutes facts and emotions about climate change were addressed in equal measure.
As one participant said in the end: “It was exciting to see these conflicts in a different way. Really cool, a climate action that was really fun.”

“Puck You!” premiere at the Museum of Natural History in Berlin.

When the weather goes crazy how does a society deal with it? Actually this question is one of the premises in Shakespeare’s Midsummer Night’s Dream. And Teekay Kreissig’s science-theatre workshop concept picks up the hot topic and transfers it to the present.

The premiere of this very adaptive and interactive project took place on Friday, Nov. 4th 2020 as one of the kick-off event of the Berlin Science Week Campus at the Museum of Natural History in the heart of Berlin. With this year’s first time focus „Paradigm Shift. Co-Creating a sustainable now!“, the two Campus days were all about multi-perspective approaches and collaborative efforts. With almost 8000 visitors over the two days, the Campus became a central hub for exchange and innovation, making the Berlin Science Week one of the largest events in Europe focussing on science and science communication. Science Week underscored the importance of the project by featuring a short interview with TeeKay as the project’s brainchild and initiator on their website.

Knowledge is not enough ! An improv theatre workshop for courage in the climate crisis

TeeKay was joined by Claudia Urbschat, one of the most famous German voice actresses. To German audiences her voice is that of Angelina Jolie just as well as the introduction of the Tagesschau, the most viewed newsroom in German television. Both of them were supported on site by many Berlin based scientists of the Scientists4Future movement.

Most of the 50 participants were not acquainted with Shakespeare’s play, but that proved to be no no problem for Teekay. He quickly sketched out the most important plot lines: a youth without prospects, a bunch of middle-class craftsmen who don’t feel sufficiently appreciated and an aloof elite. Quickly volunteers were found for all the parts.

The individual groups organized themselves as teams for 10 minutes, with some hints by the actors and the scientists. All three groups developed points and arguments dear and important to them and got all geared up.
The rest were asked to form groups of 3 and to discuss and clarify their own personal stances. This way, they would later be prepared to express agreement or disagreement as „the people“ while watching the main characters interact.

Then the actual showtime started. Shakespeare’s original Titania monologue in the moving interpretation of Claudia created a powerfully charged atmosphere. All the other actors would use their own language, acting very autonomously according to their set-ups.
First the rebellious youth came on stage, loaded with heartache, existential worries and justified anger: “You don’t listen to us, don’t take us seriously” they shouted and asked the rulers: “How can you reconcile this with your conscience?”

The ruling class pointed out that everything takes time. “We have achieved a lot and are on a good path. A few wind turbines have already been erected.”
And finally the craftsmen approached the powerful with concrete wishes: The weaver demanded „no mor disposable fast-fashion“. Another dreamed aloud of rulers who would ride bicycles instead of armored limousines.

After a few rounds of dialogue everyone came together for a feedback session. The potential of such workshops as an opportunity for people who are still refusing to deal with the climate catastrophe was clearly stated. Taking the „detour“ via Shakespeare’s characters provides a new and unchartered way to deal with one’s own emotions and knowledge about the climate challenges.
In a playful way and in dialogue with the other participants the awareness of the importance of solidarity-based action was increased.

As one participant pointed out: „Strong feelings became palpable. Seeing the conflicts in a different way was exciting. A cool activity that was really fun.”

We would like to say thank you not only to the all participants for their personal courage but also for the high discipline of wearing the masks during the workshop.
Special thanks for go out to Freddie Rutz for taking photos, to Maria Bois, Frauke Wolff and Jürgen Schwarz for the video documentation, to Alex Neumann for the video editing and Antonia Rötger for her contribution to the text.
The team of the Scientists4Future for the trust and active cooperation and a special thank youo to Gregor Hagedorn for his “head of political advisory” Philostrat.

Last but not least we would like to thank the team of the Berlin Science Week (big cheers to Ute Peters!!) and the technical staff for their support and flexibility in creating this event.

The Scientists4Future as an NGO run many other projects to increase the awareness for the climate catastrophe. Here is a Berlin tram with climate stripes. Similiar trams run in other German cities as well.
If you are intersted in joining us click here 🙂

(This website is continuously improved. This specific subpage has been updated in November 2022. In case you are able to spot any typos or a blocked link, please do not hesitate and let us know by sending an email to redaktion@kreissig.net .)