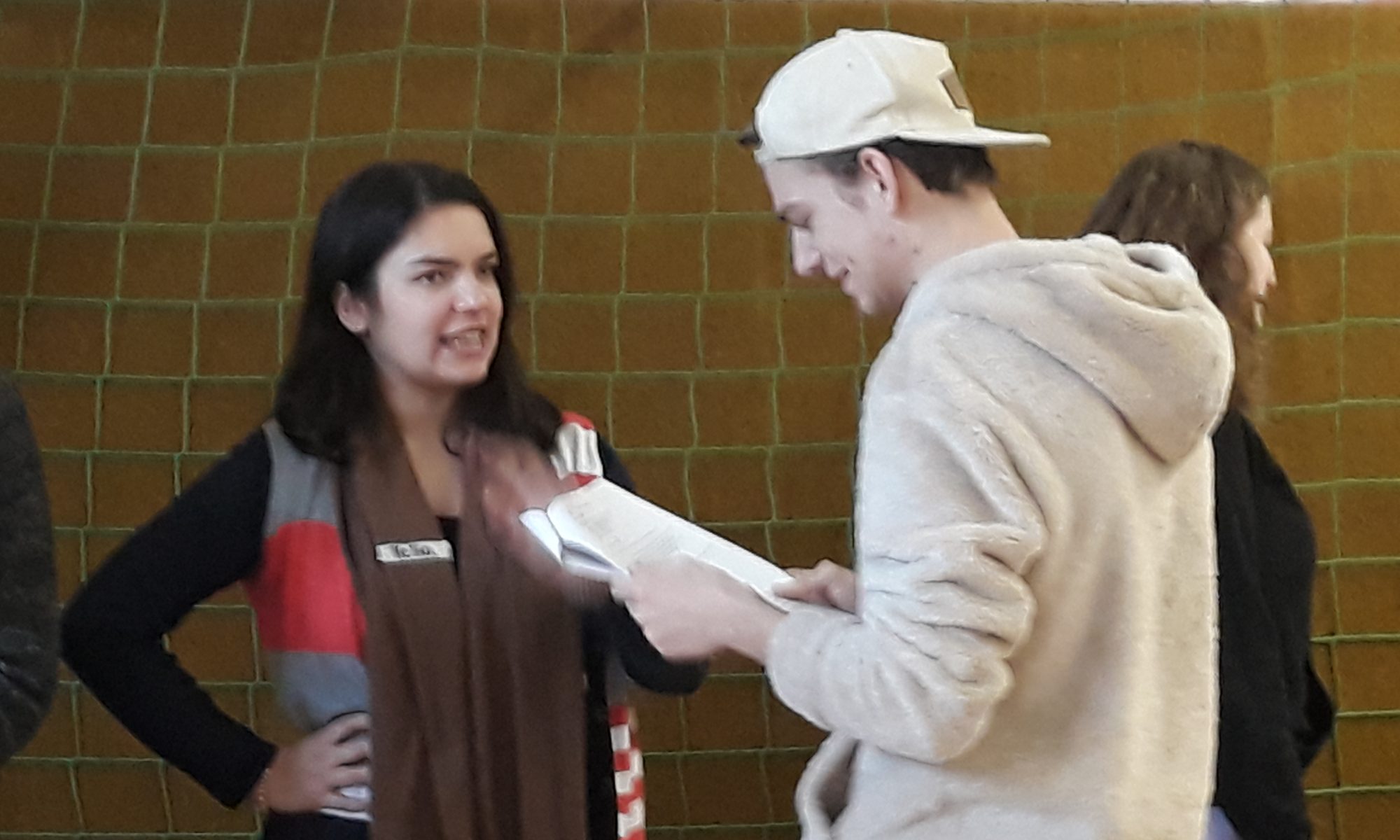 Donald Trump as template for an updated Don Giovanni 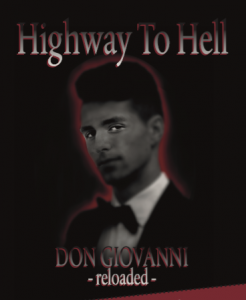 The adaptation of Mozarts famous opera “Don Giovanni” at the Rupprecht Gymnasium in Munich in January 2018 was influenced both by the #MeToo debate as well as the immoral behaviour of the present American president.
The plot was moved from Spain to the Bavarian capital Munich.

A rich hotel heir – quite reminiscent of the young Trump – seduces women unscrupulously. His lust leads him unleashes a constant abuse of power. Finally he goes for Selina, one of his young employees who has just been engaged to her boyfriend  – the young and hot-blooded Chef de Cuisine Marco.

Even before the disrespectful behavior of politicians and supervisors was widely discussed during the #MeToo debate in 2017, the participants in the seminar “Music and Stage” had decided to work on the “Giovanni” theme. Although Donald Trump’s infamous “Grab them by the pussy” is no longer quoted in the final text version, the allusions to Trump as a prototype of the unscrupulous power-hungry and sex-obsessed man are obvious.

How do you make the characters of the original understandable to young audiences?  How do you make young students understand the conflicts of their roles?
On the one hand by doing a profound character research.

And on the other hand by updating the music. Therefor a lot of Mozart’s original music was replaced by rock and pop music, rearranged and adapted for the existing band of violin, guitar, bass, trumpet, drums and keyboards.
The teenagers with the most developed voices would go for famous arias: Leon Ritter as Giovanni delevered a faboulous “Fincha al vino” and Zeno Barbieri as Luca (Leporello) gathered ovations with his”Madamina, il catalogo e questo”.

In the updated version Don Giovanni is being transformed into the rich hotel heir Giovanni Casagrande. His adversary and final avenger the “Commendatore” into the successful Bavarian contractor Claudia Berger. When she mysteriously disappears after the New Year’s reception of her company and is declared dead by the police, her daughter Anna desperates and seeks help.
With her friends and also with the business partners of her mother she seeks for justice but is disappointed by the slow proceedings of the police. Anna’s meek boyfriend Oliver pursues a career as a politician. When Anna tells him she suspects Giovanni to be the killer he refuses to believe her.

From the idea to the full-fledged performance

After 14 months of preparation this amazing project ended in January 2018 with four sold-out performances. “Don Giovanni Reloaded – Highway to Hell” had begun in November 2016 as an extended school theater project of the Rupprecht-Gymnasium in Munich Neuhausen.
Andreas Obermayer, the extremely dedicated and highly motivated music teacher at the Rupprecht, had decided to offer a full-fledged music theater production to the many talented performers and musicians he had been grooming in the past years.

Theater education at its best – to grow beyond oneself

Apart of teaching them the basics of the actors crafts for the stage a strong aspect of the production was put to foster the independence of the students in their creative work.
They adapted the libretto of Da Ponte together and transmitted in today’s language. Everyone had to create a realistic biography of their own character – so that they would all understand the deep psychological reasons for the characters  behaviour.
Such classical enabled the students to develop into proper theater professionals.

From effort to success

Although all the leading actors would have to pass their graduation exams as of mid February 2018 all of them had volunteered to invest half their winter vacation. During six very intensive final rehearsal days the many individual scenes created over the last 11 months started to blend into a captivating, thrilling and touching musical theater.

The students made the timeliness of the plot as palpable as the music
.
All the acting training, the exercises in stage presence, diction and physical awareness of the past months culminated. The by now profound understanding of their roles, the emotions involved in every scene came together: everyone was able to consciously experience their own limits in a safe space – and then courageously expand them.

The 17 teenagers (9 girls and 8 boys) performed in 2 casts. Some have already had previous experience in school theater productions, others have been singing in chorus for years, and some pupils danced their free time. Zeno Barbieri, the actor of Luca (Leporello), was able to contribute his experience in the youth productions of the Salzburg Festival. Leon Ritter as Giovanni showed the tightrope walk between dominant leader and charming seducer. and – deprived of external confirmation – also the loneliness of a  bon vivant. 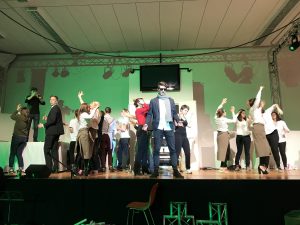 In larger scenes the main characters were supported by members of the school choir who filled in as hotel staff, lawyers, journalists, security and party guests, bringing a multitude of wunderful small highlights to the stage. 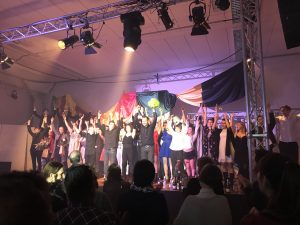 As part of the Bavarian A-Levels (“Gymnasiale Oberstufe”) all students must attend two extracurricular seminars:  one is preparing for scientific work (“Wissenschafts-Seminar”) and a practical seminar (“Praxis-Seminar”).
All teachers can offer their favorite topics and are encouraged to cooperate with external partners adding professional expertise to the projects.
Andreas Obermayer, one of three music teachers at the Rupprechtgymnasium and head of the school choir,  had suggested a P-Seminar “Music and Stage” for the 2016/18 high school graduation class which was then chosen by the 17 students mentioned above.
Thorsten Kreissig was called in as an external theater professional, first to accompany the selection process of possible shows and plots, then to supervise the staging. Kreissig gave acting classes, lured and pushed them out of their respective comfort zones and helped overcome fears and anxieties.

In addition to the work at the piece the students also took care of the organization, created the program booklet together with the German teacher, prepared the advertising with their own poster designs and also started looking for sponsors. In addition to the 90-minute weekly regular lesson, the project was only possible due to two intensive seminars. Directly after the summer holidays in 2017 everyone went to a retreat for three days in order to fully devote themselves to the play:  from morning to evening, undisturbed by other tasks, subjects and family relationships. Long nocturnal discussions built trust.
A second intensive phase in January 2018 included 4 days work in the original space: dialogues which were previously spoken at a short distance of 2 meters suddenly led across the entire length of the gym. Entrances through the park of the villa extended to 70 m, which had to be completed within a few seconds. The improvised pieces of furniture of the set were subjected to stress tests by the performers.

Claudia Urbschat-Mingues – one of Germanys most renowned dubbing actress and well known for being the German voice of Angelina Jolie – would take a regular look at the rehearsals and give advice to the students.  It had also been her idea to connect TeeKay to the school.
Ever since they had worked together in Hannover in 1996 for the production of in “Aunt Tilly and the Roaring Twenties” she had been aware of TeeKay work with children, adolescents and young adults.

Fancy even more details? Please find a detailed report in German in my Culture & Innovation Blog.

The entire project was only possible by the generous support of the school’s development association and individual parents.

Back to the landingpage

(This subpage was last updated on July 18, 2018. If you discover any content or formal errors, we look forward to receiving your feedback at info@kreissig.net.)